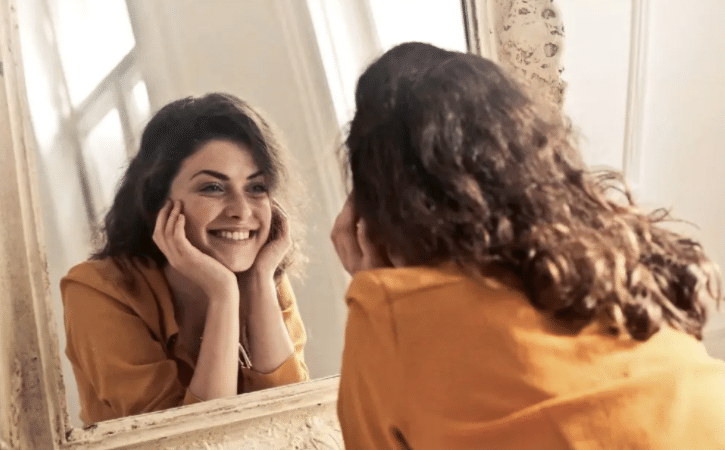 Since the emotions are not stored in a memory, they are merely referenced; so it must be possible to edit the emotions associated with a memory!

Framing! The NLP Technique That Edits Your Emotional Response to a Memory

This example is for “negative framing” – which is usually applied to negative memories. It is called negative framing because it works to reduce (negate) the emotions associated with a memory. The example will use a memory of a bad interview. You know, that interviews that you tried really hard for, but you get stuck in traffic, you arrived 10 minutes late, and the interviewer seemed to think you’d been intimate with his mother. If you haven’t had a bad interview before, you can pick another memory with negative emotions attached.
Step one: Take the memory and reduce the highlight reel to a single snapshot that represents that memory. This strange-looking character will represent my negative interview memory: Step two: Now go ahead and step back from the memory of your bad interview. So if you are looking at the memory through your own eyes, step back so you can see yourself, in the situation. If you already used a third person perspective, take a further step back so you are slightly further away than before.

Step three: So now you can see yourself, in a single snapshot that represents our bad interview.

Step four: Now make the picture black and white. Make it a little bit blurry or out of focus, like a very old photo. You can make it a sepia tone if you like:

Step five: Now for the namesake – put a frame around it. It can be any kind of frame, from an old fashioned heavy frame to a modern stainless steel frame. Stylize the picture a little bit to suit the frame. For example, – see the canvas texture below a painting, or notice the shine from the glass cover:

Step Six: Now put that frame on the wall, in an art gallery, or in a restaurant, anywhere you want. Try different lighting on the painting.

Step seven: Watch other people look at the painting, then move on.
Now, how does the situation feel? Is it still as stressful? The feelings should have dampened noticeably. Try again, repeat this process and it should further reduce the effect.

Effectively what is happening is our minds are treating the memory more like “just a picture.” It helps detach us emotionally from a memory, and by way of NLP tricks our brain into dampening any links to the emotions the memory may refer to.
Try NLP framing technique on someone else. Just read out the steps above and ask them afterwards how they feel about the emotion. Next we’ll look at how framing can be used in an interesting way to achieve an entirely different result, in the NLP technique positive framing.

Positive Framing
Positive framing is the same NLP process as negative framing, just it goes the other way round. So instead of being a normal memory moving into a dulled, framed memory, you can take a normal memory and amplify it into a strong, vivid memory.
Why would anyone want to do that? There are several reasons that I can think of for now:
1. You may have a very nice memory of someone or something that you want to amplify.
2. You may have an uncertain memory of a person, so you could use positive framing to investigate your feelings about that person.

3. You may want to use a feeling you associate with a certain memory (such as the feeling of achievement associated with accomplishing a goal) that you want to harness and use with other NLP techniques, or use it as a trigger.

Positive framing is certainly one of the most powerful amplifier techniques NLP has to offer. This can be used to amplify any emotion .